The New Wave of Non-Competes — Are They Enforceable? 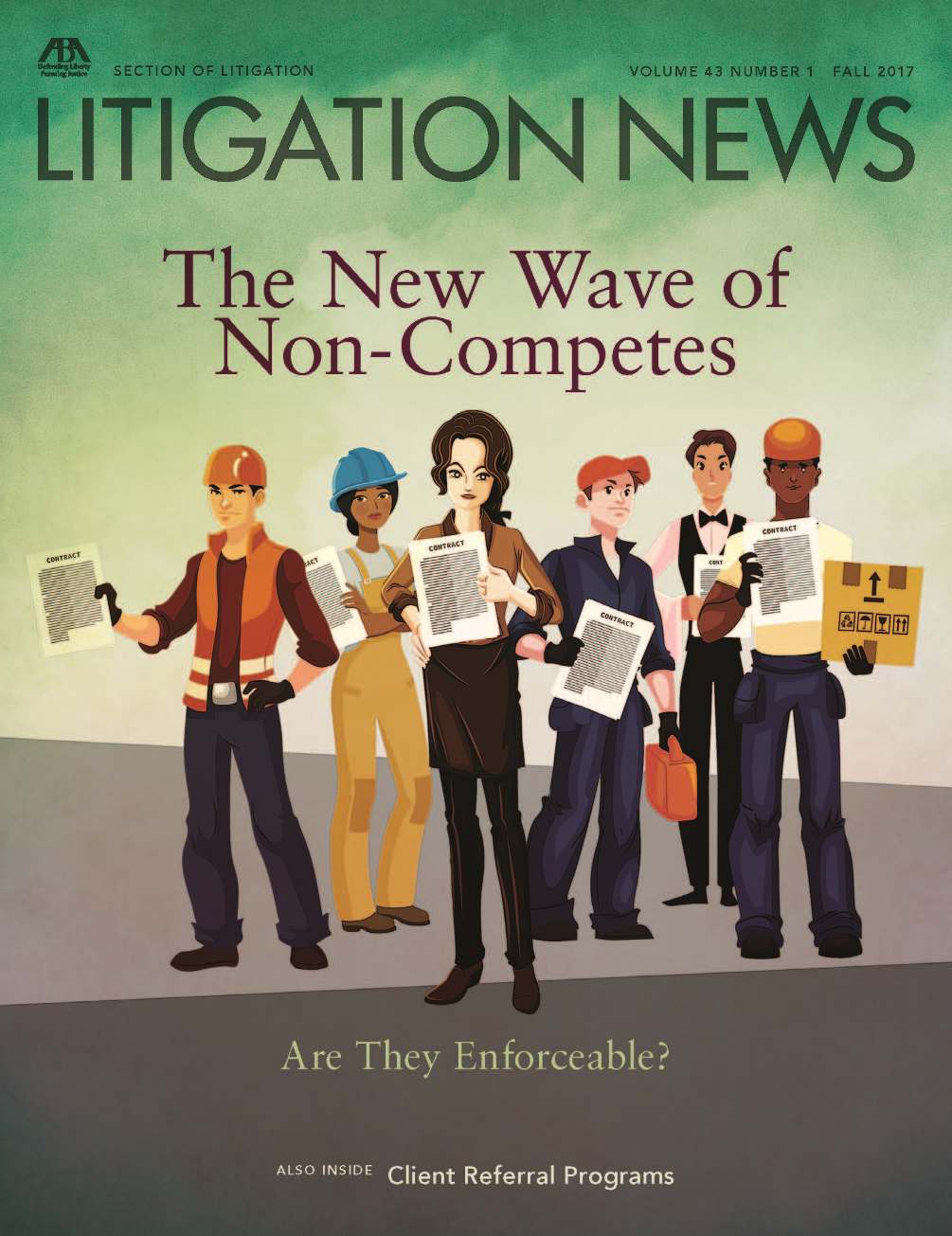 As our economy became increasingly virtual, employers appeared to become more concerned about the potential for lower-level employees to harm their businesses by leaving for a competitor. A thumb drive with half a dozen spreadsheets can leave in a novice sales professional’s pocket and seriously damage his former employer’s business.

Companies reacted to these developments with higher levels of technology monitoring as well as a more widespread use of non-competes. Zeal to prevent secrets from going to competitors may have reached a surreal level of absurdity when Jimmy John’s included in the standard employment packet distributed to franchisees a non-compete restricting a franchisee’s hourly employees from working for any business that derives 10 percent or more of its revenue from the sale of sandwiches within three miles of any Jimmy John’s location.

The Line For Non-Competes

So where is the right line for non-competes? Is the California approach, centered around a statute that categorically voids non-competes except in extremely limited circumstances, the way to go? If so, what are those circumstances where an employer should have the right to restrict an employee from going to a competitor?

In the alternative, what is wrong with the current model followed by most states, which generally permits an employer to impose reasonable restrictions on the ability of an employee to harm his or her employer by leveraging the specialized knowledge (particularly customer relationships) and training the employee receives? Why should it be improper for an employer—who invests time and money building an employee’s industry-specific skills, relationships, and knowledge base—to seek to prevent competitors from treating its employee base as a “farm team” and thus from raiding the training employer to sign away its most valuable players after that employer has groomed them for success?

Looking Back At Non-Competes

“Traditionally, non-competes were disfavored in the workplace, but through the 1980s and 1990s, the courts began to find a place for the restrictive covenants, realizing they could be useful to the economy if they served legitimate business interests and [that they] did not restrict free trade,” offers Teresa Rider Bult, Nashville, TN, cochair of the Employment & Labor Relations Law Committee of the ABA Section of Litigation. Over time, Bult notes, courts began to accept restrictive covenants more readily.

“Thus, although the courts would say the restrictive covenants were ‘disfavored,’” continues Bult, “they would often enforce them after a detailed analysis of reasonableness and scope standards. As a result, many states allowed the courts to ‘blue pencil’ the agreements to make them more reasonable—a trend that resulted in more such agreements being enforced” with the provisions that violated the state’s common law stricken from the agreement.

Non-Compete As An “Unfair Labor Practice”

This year, Senior Circuit Judge David B. Sentelle of the U.S. Court of Appeals for the District of Columbia Circuit issued an opinion in Minteq International, Inc. v. NLRB. Intervening in the case was the International Union of Operating Engineers, Local 150, AFL-CIO. Minteq began to require its new employees to sign a non-compete agreement, which was invalidated by the appellate court as a violation of section 7 of the National Labor Relations Act (NLRA).

Specifically, in 2012, Minteq began, “without bargaining or giving notice to the Union,” to require all new employees to sign a four-page non-compete agreement. In 2014, the union filed an unfair labor practice charge against Minteq for its failure to bargain with the union about giving the non-compete to new employees. On July 29, 2016, the NLRB held that Minteq violated the Fair Labor Standards Act by imposing the noncompete in 2012.

The appellate court upheld the NLRB’s finding that the non-compete was an unfair labor practice. Specifically, the court held the non-compete was a mandatory subject of bargaining because it “prohibits an employee from working for another company that might have any connection to Minteq’s business both during his employment and for 18 months afterward, effectively imposing a cost in lost economic opportunities on employees.”

Finally, the appellate court addressed Minteq’s argument that it had the right to impose the non-compete because it had bargained for a broad management rights provision. While the court agreed such a provision might permit the imposition of some of the provisions of the non-compete, it held “the CBA [collective bargaining agreement] did not cover all of the NCCA’s [non-compete’s] provisions. Interpreting the CBA de novo, we conclude that, at a minimum, nothing in the management rights clause of the CBA permits Minteq to impose obligations on employees after they leave employment, as most of the NCCA’s provisions purport to do. Nor does the management rights clause permit Minteq to bind employees’ ‘heirs, successors, and assignees.’” Because it concluded that not every provision of the non-compete could stand, the appellate court did not reach the question of which clauses would be enforceable.

“The Minteq decision is pretty narrow,” says Bult. “If the Minteq decision is somehow taken to its extreme, any non-compete, no matter the level of employee, could be a potential violation of Section 8, because it can chill the exercise of [the union members’] rights.”

“If there was a Democratic president right now, the NLRB might have had the power to take the decision to that extreme. With a Republican president and new, more conservative board nominees, that is very unlikely. In fact, the opposite will probably be true,” she postulates.

When a non-compete gets litigated, there are three basic approaches a court may take when dealing with an agreement that goes too far. These approaches are sometimes referred to as reformation, blue pencil, and red pencil.

Commentators who supply 50-state surveys on this subject vary somewhat in their analyses, but they agree that reformation is the most common path courts take with non-competes, with about 30 states taking this approach. They also agree that in some instances a state appears to permit both a reformation and a blue pencil approach.

Reformation typically involves the court rewriting the contract to be consistent with the parties’ original intent as modified by the extent the agreement does not comply with the state statutes and common law on the subject. Reformation may be called the rule of reasonableness, the partial enforcement rule, the reasonable alteration approach, or judicial modification, depending on the court wielding the remedy.

The next most popular way courts address non-compete agreements is by applying the blue pencil doctrine. When applying this doctrine, a court will attempt to rescue a portion of the noncompliant contractual provision by striking out the portion of the clause that renders it unenforceable with a blue pencil. Between 10 and 18 states follow this approach, depending on which commentator is counting.

The final method is the red pencil, or all-or-nothing, approach. In this case, the court will invalidate the entire noncompete. Nebraska and Virginia take this approach, as well as perhaps California, Oklahoma, and Wisconsin. According to commentators, Montana and Utah have yet to address the question.

While a rule making non-compete agreements unenforceable as a matter of law eliminates some claims, it does not mean employees are immune from suit when they switch to a competitor, cautions Roland M. Juarez, Los Angeles, CA, chair of the Restrictive Covenants/ Trade Secrets Subcommittee of the Section of Litigation’s Employment & Labor Relations Law Committee. Claims of trade secret violations, as well as breaches of the duty of loyalty, among others, give recourse to an employer harmed by the departure of a key revenue generator or C suite leader.

“Silicon Valley took the position early on that non-competes are a detriment to innovation and development,” begins Juarez. He notes this approach does not give any weight to the fact that “somebody [usually a prior employer] paid to foster that knowledge and development.” As a result, “a lot of litigation in California centers around ‘employee theft’ or the theft of information [from the former employer] leading to a loss of clients,” Juarez explains. “This is not so much that you can’t hire who you want,” he says, but rather that you have to be careful how they behave after you hire them.

Although Jimmy John’s backed off its non-compete after it was made public by the Huffington Post, these agreements are not going away. They are included in the new hire package for many companies. Juarez agrees, noting that he does “not think that the new employees read them when they sign them.”

“The rationale behind implementing non-competes for unskilled labor, such as sandwich makers at Jimmy John’s or warehouse workers at Amazon, is to ensure that training dollars spent on that individual—to train the methods of the ‘freaky fast’ delivery—aren’t simply given away to the competitor,” opines Bult.

“Another rationale might be because the processes themselves are trade secrets. If, for example, Jimmy John’s argued that there was some sort of secret formula to the ‘freaky fast’ model—such as a time machine allowing delivery bikers to move at warp speed—then there could be some legitimate reason to enforce such agreements,” she continues. “But the reality is that (a) having employees sign a non-compete to recoup training costs cuts against one of the key tenets of non-compete law—that we cannot unfairly restrain trade; and (b) there is no secret Coca-Cola formula to freaky fast delivery,” she adds.

Juarez, who typically represents employers (both attempting to enforce noncompetes and to protect a new employee from an attempt by a former employer to bully him or her into resigning his or her new position) says there is a practical consideration. “Perhaps 90 percent of the time the employer is either turning a blind eye to the employee or just sending out a letter telling that former employee of his obligations and that there will be consequences” if the former employee crosses an often purposefully vague line, he says.

“The economic reality, however, is these lawsuits are very, very expensive to a company,” says Juarez. Accordingly, the company will carefully “weigh the amount of money it will spend to get an injunction against the utility of one,” he offers.

“The litigation is not only expensive litigation but it also takes substantial time away from the people in power at the company” to spend on their primary focus: running the business and pursuing increased revenue and profit, Juarez adds. Companies do not want to spend the time and money on a lawsuit unless it means something, he concludes.

Bult concurs: “The pendulum has seemed to shift, in my opinion . . . for several reasons,” she says. “First, the courts seemed to tire of seeing petty non-compete cases, which seemed overreaching for lower-tier employees as well as the battle royale for legitimate interests. Second is a general societal shift toward stimulating technological change and sharing of technology. Third is the changing nature of the employment relationship where companies were less loyal and employees were more mobile. Finally, there seems to be a growing sense that non-competes are ‘unfair,’ even when reluctantly enforced by the courts.”

“Thus, courts are scrutinizing noncompetes more closely and rejecting many of them. Moreover, state legislatures are implementing legislation to curtail the use of non-competes, as in California,” she continues. “With that being said, the court decisions vary widely, and some states are decidedly remaining conservative in this area (for example, Florida),” she notes.

In sum, we probably are more likely to see the pendulum in this area of law continue to swing back and forth than we are to see the litigation in this area dry up anytime soon.

This article was originally published in the Fall 2017 issue of “Litigation News” from the American Bar Association.